skip to main | skip to sidebar

First of all, thanks to everyone who has sent good wishes via email or Facebook and of course my five buddies below who are happy for me and for Bill.  He returned to Africa last week and it was hard to say goodbye, but the good news is that his month stint will be up soon enough and we will be together in November/December.
So I haven't JUST been falling in love since I got back to Houston - although some would say that's enough.  But wait.....there's more!!
Bill and I went to New Orleans to scout out locations for a studio.  We found a few places on Magazine Street, which borders the Garden District (old money) and the Irish Canal (up and coming gentrification).  The first place, which had parking, was a former Hollywood Video and it would have been a perfect location, but the landlord/managing partner of the building was, to put it kindly, not so kind.  It wasn't too hard to determine that he would not be a person I would want to work with over a long period of time.  The second place also offered parking, but was entirely too big -- a pretty cool building though!  Formerly a funeral home, then the recording studio for Nine Inch Nails.  If those walls could talk!!!
But there had already been a bid on the building, so that didn't work either.  The third opportunity was a PERFECT fit - a beautiful former warehouse for sale, it would be great to build out, but there was no parking included in the sale of the building.  And no parking is a show stopper. 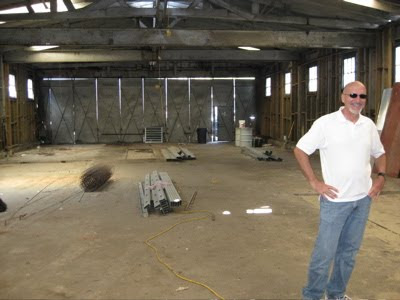 Perhaps another trip will be in the cards in the future.  We'll see.  By the way, that's Bill smiling in the warehouse-wonderful smile, huh!  In addition to studio scouting, we got to stay in a beautiful B&B, and for me the highlight of the trip was sitting with Bill on the porch of the 1900's structure watching it rain like crazy a few feet beyond our sanctuary, while the street cars splashed through giant puddles and we sipped on wine with Higbee sitting at our feet.  It was a beautiful afternoon.
I also went to San Antonio to attend yet another seminar with Diane Ducharme - I'm starting to stalk this woman!!  I've seen her in Palm Desert, spent a lot of time with her in Massachusetts,  attended her seminar in San Antone -- and guess what?  I'm going to see her in Vegas on the way home!!!  In any event, I learned so very much from the event, and also got to see a bunch of friends from training - Jill, Carlos, Casey and Mani! 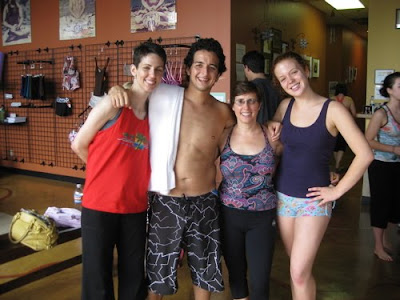 I'm pretty sure I win the prize for seeing the most people from Fall 08 training over the last year. At some point, I'm going to go through the yearbook and make a list.  I'm guessing I've seen at least a third of the US students from training.  Another bonus from this adventure!
And of course, I've been teaching.  Since I arrived in Houston, I've taught 33 classes and yesterday, I taught 4.  That was an amazing experience.  Overall, I feel just great.  I have been able to put to use all the things that Diane has taught me, not just about my own teaching, but also about how to help people with physical problems - most importantly is how to encourage them to not be afraid of their bodies and do the best they can -- the right way.  Every time I come out of the studio, I can't help but feel I have the best job in the world.  I have the honor of helping people improve their lives.  What a wonderful profession. 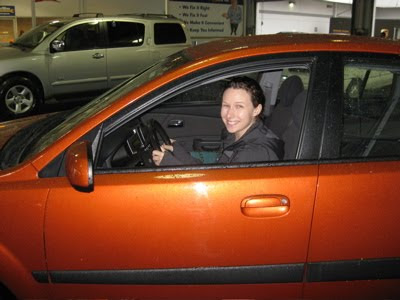 Have also been spending some time with my wonderful "little sister" Liana.  We bonded when I was here in June, and this time, we got even closer.  I got to go with her when she bought her new car, and last week, we went to the opera together - it was a dress rehearsal, and we were definitely in the nosebleed section, but "The Elixir of Love" was wonderful and very apropos for both of us!! 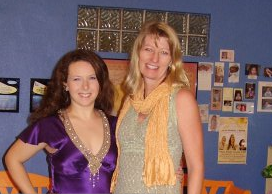 So it's been a deluge, not just of the rain this season, but of love, laughter, learning and leaning (that's the best alliteration I could come up with that refers to the yoga).
I'm the luckiest girl in the world.
p.s. Bill, I'm still drenched and soggy from the rain - will post a pretty picture of me in new glasses tomorrow when I have a better chance of not looking like a wet rat.  xo
Posted by lucille_allen at 6:22 PM 4 comments:

Back in the Saddle Again 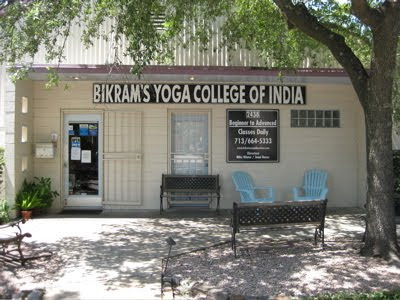 I have returned to Houston. Am teaching like a madwoman – putting to use all the things I’ve learned on my trip. It makes a difference – I am so much more confident and comfortable up on the podium. I’m able to give people with bad knees guidance so they won’t hurt themselves, I understand the poses better and I know the dialogue more and more and more. I just LOVE this path!!!!!

But here’s the real reason I’m back in Houston:

A few years ago, when I was in the total dumps feeling sorry for myself and rather hopeless about a future partner, I went to Safeway. As I was checking out with my single person's basket, the checker, a rastafarian guy with dreads, asked me if I had found everything I needed. I looked in the basket and told him, "well, all the food I need is in there, but there's no man in that basket!" He replied, "Don't worry, he's on his way." I looked up, a bit shocked and said, "Excuse me?" He again said, "He's on his way, custom made, just for you." I almost burst into tears and said, "I've waited so long!" And again he said, "Don't worry, he is coming, custom made, just for you." I held on to those words, and after a while, really started to believe it.

His name is Bill. I was introduced to him in July when I was in Houston. Cheryl, a teacher at the Houston studio insisted that I meet him, but by the time I had agreed, he had already left for work. Bill does accounting for an oil company and works 30 days in Algeria , and then has 30 days off. I gave Cheryl my email address and my blog address, and Bill started to email. We kept up a correspondence, and then talked on the phone when he got back to Houston and I was in Massachusetts . He made a quick trip home last month to attend his mom's funeral in Kansas, and we spoke even more. And when I returned to Houston , we actually got to meet in person. And all I could say was WOW. He has a killer smile and eyes that light up a room. He is intelligent, articulate, interested in a variety of things, likes good wine and does the yoga. He's an adult.

I feel very different this time. I'm not jumping up and down excited, there aren't chills all over my body (well, most of the time) and I'm not super giddy. I just kind of know that this is the right one, so I'm going with the flow of it - not pushing one way or another. It feels so right.

So Bill is going to come to California after Thanksgiving. We are going to make a tour of Northern California. He'll fly into San Francisco , and then we'll head up to Marin and into the wine country (he's a big fan of french wine, and I'd like to introduce him to some good California reds), then on to Sacramento, up to Grass Valley to see one of his sons who lives there and then down hwy 49 to Yosemite . I wanted him to come to the Bracebridge dinner, but he'll have to return to Houston and get back to Africa before the dinners start. That will have to be something to look forward to.

After the priest gave my mom last rites at the hospital before she died, I asked her to do me a favor. In her typical crusty New England style, she said, "WHAT." I asked her that when she was out of pain and floating around checking up on us, to help me find my man. The right guy. She looked at me in the eye and said, "Lucille, your father's already working on that." Very UNtypical response, and one that shook me to the core. Those were her lasts words to me. But I think together my mom and dad have come through and although I had to drive all over the friggin U.S. to find him, he's finally here, custom made, just for me.
Posted by lucille_allen at 8:14 AM 5 comments: